There is a time when human-interest stories of strong and gentle people preparing for winter in a remote resistance camp fade before a heart-stopping demonstration of raw communal courage, made in the face of overwhelming militarized force. A demonstration documented only on social media; the most important history of our time is being made far away from the mainstream news cameras.

That’s what happened yesterday. My accustomed middle-class routine was setting in; I’d intended to spend the day blogging about the amazing people I met at Standing Rock. But upon seeing a stark, terse warning in a NoDAPL group’s feed, I spent the day frantically scouring Facebook for the latest news, trying desperately to find out what was happening and get the news to someone – anyone – who could give it the mainstream media coverage it deserves.

Urgent. Tell frontlines on all channels. Confirmed: Around 50 police vehicles on the way to front lines with 5 trailers full of atvs.
Estimates from
30 police suvs
5-6 flare beds full of atvs (5 atvs per trailer)
4-5 unmarked suvs
4-5 Cop cars probably from various jurisdictions
5-6 sand colors humvees/mraps
Get get word to frontlines
Seen 45 miles east of bismarck around 10:45
So total 60 vehicles plus 30 atvs
Plus forensic van

It was another reminder – if reminders were needed – that Oceti Sakowin is not a rainbow social gathering, much as it seemed like one, with people of all races, genders, and creeds present and pitching in harmoniously. The camp is very genuinely a strong and oppressed nation’s last stand in defense of its land and water, its people and ultimately all peoples, human and otherwise, who occupy the watersheds of the continent’s great heartland rivers and Oglala aquifer.

There are still stories to tell about my stay at Oceti Sakowin, but I can’t think of them now. From what I have learned today, on the morning of Sunday, October 23, the water protectors set up a blockade on Rt. 1806 and reclaimed and reconsecrated the land ceded to them in the 1851 Fort Laramie treaty. According to their press statement: 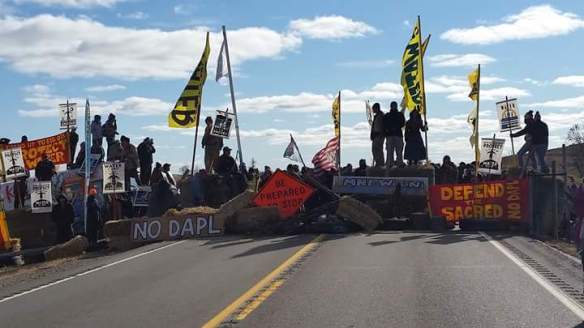 “This frontline camp is located on the final three 3 miles of the proposed pipeline route, before it connects with the drill pad that will take the pipeline beneath the Missouri River. Active construction of the Dakota Access pipeline is 2 miles west of this frontline camp. Oceti Sakowin water protectors continue an on-going pledge to halt active construction as frequently as possible.

Mekasi Camp-Horinek, an Oceti Sakowin camp coordinator states, “Today, the Oceti Sakowin has enacted eminent domain on DAPL lands, claiming 1851 treaty rights. This is unceded land. Highway 1806 as of this point is blockaded. We will be occupying this land and staying here until this pipeline is permanently stopped. We need bodies and we need people who are trained in non-violent direct action. We are still staying non-violent and we are still staying peaceful.”

Joye Braun, Indigenous Environmental Network organizer states, “We have never ceded this land. If DAPL can go through and claim eminent domain on landowners and Native peoples on their own land, then we as sovereign nations can then declare eminent domain on our own aboriginal homeland. We are here to protect the burial sites here. Highway 1806 has become the no surrender line.”

A signpost by the Cannonball River points to water protectors’ places of origin: more than 200 indigenous nations from the U.S., Canada, Latin America and South America, plus innumerable non-native supporters.

They were met with a massive military force – armored vehicles, tanks, sound cannons – and a pro-DAPL sniper shot a video drone out of the sky to eliminate documentation of the event. Later that evening, Linda Black Elk, tribal coordinator of the Standing Rock Medic and Healer Council, told me that the state’s forces “have seriously lost their minds.”

That is as much as I know at this time. I have seen no new news so far today.

There were warnings even before I left that something was in the works. The police patrols on Rt. 1806 past the camp and in the air were increasing in frequency. People coming into camp reported seeing police and military vehicles massing at points alongside the highway. At the communal tables in the dining tent, front-line activists spoke of seeing others arrested, passing time with Amy Goodman (who had stopped briefly at Oceti Sakowin before proceeding to her hearing for alleged rioting while doing her job as a journalist, recording dogs set on unarmed water protectors a month before; the rioting charge was ultimately thrown out in court). The consensus: the Bill of Rights was being shredded, with freedom of expression, freedom of assembly, and freedom of the press in tatters. And when would Obama step in?

It was hard leaving the friends I’d made; all of us were aware that anything might happen in the coming days or weeks. The National Guard at the “information stop” on Rt. 1806 waved me through with barely a glance; I learned later that the checkpoint was shut down the next day. Because communications are jammed and mainstream media, by and large, are studiously ignoring the history being made there, getting news of events as they happen is next to impossible.

And so I connect by social media with other Standing Rock supporters across the nation, make prayers, and reach out to all the media folk I know.