By Tuesday of Experience Week, our little group had gained somewhat of a feel for the grounds of Cluny Hill and Findhorn Park. It was time for our focalizers Craig and Pat to introduce us to the wider bioregion. We p 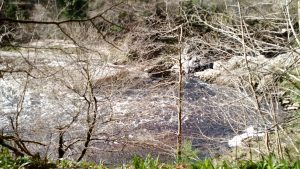 iled into the shuttle bus and rode past fields of grazing sheep, through glorious birch, holly and spruce forest, to the Findhorn River. We parked at a trailhead above the spectacular crags of Randolph’s Leap … a spot that clairvoyant/metaphysician R. Ogilvie Crombie (“ROC” for short), a guiding light for the growing community, had identified as particularly powerful and watched over by benevolent nature spirits. Here, Craig and Pat invited us to find a spot, settle in, and meditate, consciously reaching out to the awarenesses of the wood.

With some minimal experience of communicating with nature spirits, I was praying hard for connection here. With all my senses awake, I chose a trail that sloped gently downhill, reaching for the tingle that would tell me I’d found the right spot. Singing a Libana chant as invocation as I walked, I felt into the energy of the wood: where was the best place for me to seek connection?

And there it was: a dropoff past a towering Scottish Pine, past ferns and bracken to a sandbar below. Warned by Craig and Pat of the river’s potential for flash floods, I didn’t want to go close to the water…but where to sit? Perching precariously on an outcropping of the slope, I looked to the exposed roots of the Pine, and saw that they intertwined with the roots of a neighboring Beech to form a natural nest. Feeling like a child climbing a jungle gym, surprised at my own temerity (and blessing the deep treads of my galoshes), I clambered over and hauled myself up and in.

The roots on which I rested were covered in moss, swathed in ferns and lilies growing in the dirt accumulated over countless floods.  Facing the river, the trees stood proudly on their exposed, mossy roots like Louisiana Cypresses, with their hidden path-side roots no doubt holding up the hill. I couldn’t imagine the force of floods that would sweep away earth this high – easily 25 feet up from the riverbank. But the trees stood strong, their roots and branches intertwined,

I settled my tush, crossed legs to meditate. Just in front of me a Beech root snaked lithely over a Pine root, both disappearing down into the hillside. I felt the trees embracing in a long partnership. You are at a bridging place, a connection point, I heard in my mind. That is your work: helping to build connections between humans and the natural world. It was the beginning of a long conversation: my trepidation was met with reassurance and guidance; affirmation that despite my self-doubts I had a job to do; even floundering as I have been, a good start had been made, my good intentions were recognized. I sang, laughed, cried…felt a flood of love and connection with these Standing Beings and the micro-ecosystem they supported.

We had 90 minutes in which to do our walk, meditation, and return. I don’t know how long I sat there, cradled; it seemed far longer. As the conversation drew to its end, I saw a discarded juice box half-hidden, caught in the roots of the Beech. It summed up the culture from which I’d come: disconnected from the natural world, focused on immediate gratification, careless of the cost or consequences of its consumption. Yes, exactly, came the response. I wanted to remove it, as a token of service in gratitude, but  I could see it wouldn’t be easy – the box was well lodged, out of reach and slightly down the hill, outside my nest. I looked and found a pointed stick ready to hand, and with diligent poking, maneuvering, and prayers for balance, I edged it out and up to my hand. Yes!

With that, it was time to go. I offered my gratitude to the trees, and asking their help in getting back to the path, found roots fanning upward like a ready-made flight of steps. A short scramble and I was on level ground, bowing to the trees, the river, the spirits of the land, and walking back to the meeting point with the juice box in my hand. 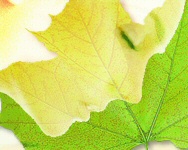 Giving Your Vision Your Voice

If these words resonate for you, Phila Hoopes also provides intuitive copy writing - web content, ghost blogging, articles, e-products and more - for healers, social entrepreneurs and visionary nonprofits at Your Words' Worth.
She also practices Reiki for animals and people, in person and remotely. To learn more, visit All Relations Reiki